Written in collaboration with Patricia Milton

You may remember the 1946 comedy “Born Yesterday” by Garson Kanin, which became a timeless Judy Holliday-William Holden-Broderick Crawford film in 1950. In this new version, by San Francisco playwrights Andrew Black and Patricia Milton, the girlfriend is a boyfriend, the boor is a porn-king and the Henry Higgins (so to speak) is a professor of theater.

The dialogue is snappy and quite funny. Adam Edwards plays the sex-crazed, flirtatious, irresistible Rex with body and heart. During his transformation into serious actor, he gets to show some of his real acting chops. All told, a fun and poignant finale. 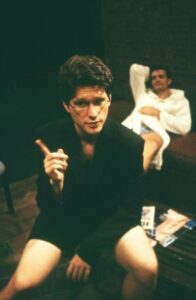 My original theatrical idea was to be a director. I remembered fondly many of the plays and movies I had enjoyed growing up. Back in those days, all the stories involved heterosexual couples. As a man who was attracted to other men, I always had to cross-translate those stories to make them relevant. There were obvious problems with this. If it was a love story, of course, I had to identify with the female character so the object of my affections would be a man. But that meant I was identifying with a woman. Or, I could identify with the character whose gender I shared, but that meant pretending I was attracted to women. Ick. (For any heterosexuals reading this, this problem is actually more psychologically painful than you might imagine.)

So, I decided I wanted to tell my own stories about men who were attracted to men, and I decided I could, as a director, simply recast some of the classic love stories of the stage with all-male casts and tell the story that way.

For instance, Noel Cowards’ Blithe Spirit (about a man married to his second wife and haunted by the ghost of his first wife, who—not incidentally—is trying to kill him so he can join her in the afterlife) seemed a perfect candidate. Make all the characters men, and voila!  So I had a meeting with Ed Decker, the artistic director of the wonderful New Conservatory Theater in San Francisco. He informed me that I was not the first gay man who had thought of such a thing. The problem, as he described it, was that Noel Coward’s descendants are still making a lot of money licensing Noel Coward’s works and they are not interested in non-traditional casting for these plays. I realized that if I were to wait for Noel Coward’s descendants to change their minds, I might be waiting a long time. The solution came to me: I would write my own plays and tell whatever stories I wanted.

I was doing a lot of international travel for my job at the time. I hooked an extra week onto a trip to Hong Kong and Patricia joined me for a week in Bali. We came back with a first draft. We signed up for a class at the Writers’ Salon in San Francisco. We were the only students who came in with a completed first draft and our teacher Julie Oxendale was a great source of support and encouragement. There were ups and downs. Suffice it to say, we completed a submittable draft in 2001. We were the finalists in a national playwriting contest in 2002 (Dramarama, sponsored by the Playwrights Center of San Francisco). The play was accepted for production in 2003 (Fritz Blitz in San Diego, sponsored by the Fritz Theater Company). Porn Yesterday played to its first audience in the San Diego Repertory Theater space in San Diego.

We decided we were on to something. Interestingly, the first three theater companies that said they would produce this particular play actually produced it (San Diego, Phoenix, New York). We were to learn that that is somewhat unusual. Frequently, people say they will do your play, and then (for various reasons) don’t. It is hard to top the thrill of seeing your play on the stage, and certainly, the first performance of the first play is a special kind of magic.

Pat and I love the story of our hero Rex Everest who tries to change his life, and discovers that, well, it’s not as easy as one might think. I will give away the end. His life does change. And, of course, so did mine and Patricia’s. Thanks, Rex.