The fantasy role reversal comedy gets an update! Lincoln High School is turned upside down when “Killer” Kerrgian, the homophobic quarterback of the football team is magically transformed into a homosexual during homecoming week. A passing fairy godmother has granted one of Killer’s classmates a revenge-type wish. The football star gets to learn what life is like on the other side of the pom-poms; and Ricky, the gay wish-maker, learns a few lessons about self-acceptance as well.

*All photo credit to Daniel Axler

Kudos go first and foremost to the playwright, Andrew Black, for taking a predictable storyline and turning it on its head, while simultaneously actually having something to say. I don’t want to give any surprises away but the plot refreshingly steers away from stock character types and throws in more than a few pleasant twists.

I had the good fortune to not only see the new comedy, “Another Man’s Slingbacks,” presented by Khaos Company Theatre through June 24, but also to see it with playwright Andrew Black. Black didn’t settle for just indulging in queer stereotypes. The resulting story explores the fact that to come of age, all teens need to “come out” of the expectations and roles set for them by the social constraints of high school. 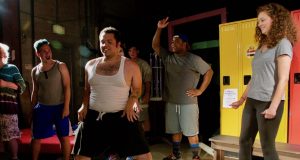 The story behind Slingbacks is not as complicated as the stories behind some of my other plays.

I saw the movie Freaky Friday in a movie theater (the Jamie Leigh Curtis/Lindsay Lohan version) and as I walked out, I found myself wondering what it would be like if a straight guy were suddenly and magically transformed into a gay guy overnight. That simple question is what led to this play. It seemed that the play would work best in a closed environment, like a high school. When I began to write, I was fascinated by the idea that the straight guy is kind of a jerk and his transformation actually has an unexpected positive benefit, in that people initially like the changes in him.

I submitted the play to the New Works of Merit contest sponsored by the 13th Street Repertory Theater in NYC. I was gratified, of course, when they selected my play as their winner for 2009. I received a staged reading and eventually a production at the theater.

A couple of things worth noting: This play was the first one I wrote independent of my wonderful collaborator Patricia Milton. I brought her the idea and she wasn’t inspired by it. She told me she thought I should write it myself. I was taken aback. Could I write without her? I developed a certain amount of confidence writing with someone else, but I wasn’t sure if I could pull it off on my own. Though Pat and I would go on to collaborate on other projects, since then we have pursued our own independent work as well. 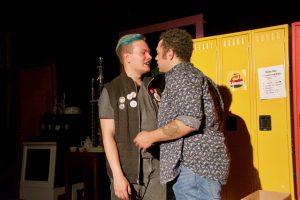 Secondly, I found myself strangely reluctant to identify the key difference between straight guys and gay guys. In order for the play to work, I realized, I had to do that. In Freaky Friday, the mother is uptight and super-responsible. She needs to learn to loosen up. The daughter is careless and irresponsible. She needs to develop some maturity. The role reversal serves to teach each person a lesson she needs to learn. What would be the lesson for my straight guy? What could being “gay” teach him about being human that would be worth knowing? I won’t tell you the answer here; you’ll have to read or see the play. However, part of my path was to identify that certain something for myself, so that it could be included in the play.

One last thing: the play does trade on stereotypes about what it means to be gay. Interestingly enough, cultural attitudes have changed enough since 2008 that I have had to update some of the references. In general, being gay does not automatically make one a pariah in many places (though it still does in some).

I love this little play, and whenever it is produced, it is a sure-fire crowd pleaser. I hope you will have the chance to enjoy it as well.