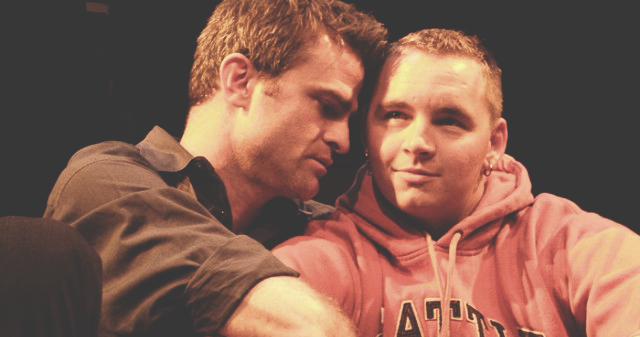 David explores the many facets of his identity as a gay man, while his married lover Michael remains in the closet. The similarities and differences in their life experiences come to light in the Seattle hotel room where they meet every second weekend in September over a twenty-five year period. The changes in the gay community during a pivotal period of its cultural history are also revealed.

Michael (Christopher P. Kelly) and David (Bradly Mena) are so much more than gay versions of George and Doris, their heterosexual counterparts. For starters, they are more interesting, both as individuals and as a couple, and the dialogue that Black has put in their mouths is uniformly sharp, whether the scene is poignant or laugh-out-loud hilarious. 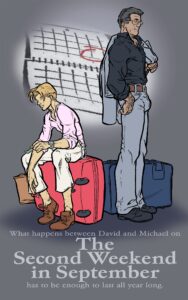 I remember enjoying the movie Same Time, Next Year which was released in 1978, the same year I graduated from college.

It was a wonderful showcase for the female actor Ellen Burstyn and provided laughs and a tear or two along the way. I have never actually seen the stage play itself. The basic idea has shown up in other places. There is a play called The Fourposter (later a musical version–I Do, I Do). The idea is to view the intimate life of a married couple a slice at a time over a number of years from the perspective of their bed.The updated idea in Same Time, Next Year (STNY) is that the couple in the story is unmarried and having an adulterous affair which transpires one weekend a year over a twenty-five year period. The audience is invited to eavesdrop on these liaisons every five years.

STNY has strengths and (from my perspective) a few glaring weaknesses. It is overly “jokey” and lacks a truly satisfying payoff at the end. As I reflected on it, I was struck by how the play serves most interestingly as a cultural history of the women’s rights movement. The character of “Doris” goes through cataclysmic changes over the course of the play, reflecting the amazing changes in women’s roles during the time period in which the play is set. The character of “George,” however, hardly changes at all. Men’s roles, alas, did not change that much.

I reflected that it might be interesting to do something similar around gay male relationships, a play which would explore the idea of intimacy between two men as a couple and at the same time look at gay cultural history through the lens of a specific male same-sex relationship.

If one character were married to a woman, that could be the obstacle that forces the two men to meet clandestinely. The “single” character would, of course, be the one who changed over the years, as the gay community changed and matured. The “married” character, trapped in his closet, would remain static and watch as his younger inamorata worked through his transitions. Thus, The Second Weekend in September was born. (I was also interested in writing a play with a small cast and a single set, in hopes that it would be more producible.)

It was important to me that each scene have its own narrative arc. The plot could NOT simply be comprised of the characters 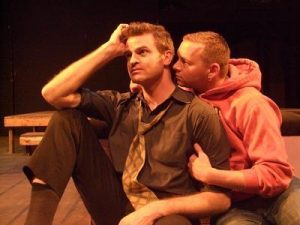 recounting events that had transpired over the course of the intervening years. Each scene had to have its own major dramatic question and the exposition had to be revealed organically in that context. Each new scene (beginning in September of 1982) had to reflect some essential aspect of gay culture that was “live” at the time. 1982 serves as a bit of an old world order—freedom and liberation. 1987 deals with the reality of AIDS. Other subjects include addiction, recovery and the advent of same-sex marriage.

I tried to find cultural totems that could be used to reflect on these specific times. Such individuals as George Michael, Freddie Mercury, and Bill Clinton provided good references to anchor the characters (and the audience) in the story and the era.

And the theme: Well, it is true that often the people who make the biggest impact on our lives are people who….well, maybe we shouldn’t have ever known. Put another way, even transient relationships can have a big impact if we open to their possibilities. What happens between Michael and David on The Second Weekend in September turns out to be enough to last all year long. A whole lifetime in fact.