Inmate #6627405 (“Pretty Boy”) is facing a 28-year sentence at the North Central Correctional Institute for his role in a killing.  His attempts to get the drugs he uses to deal with his life on the inside lead him to join a prison-based program. The aim of the program is to produce puppet plays for children visiting their fathers in jail. He hopes to smuggle contraband out of the “puppet room” that he can exchange for drugs. Pretty Boy learns how to make puppets, but his puppets start to have their own ideas about how his life in jail should unfold. He begins to question his ideas about freedom….and his own incarceration.

The play, Puppet Man, is inspired by real life events that took place in a prison in northern Ohio (the North Central Correctional Institute).

Theatre on the Square 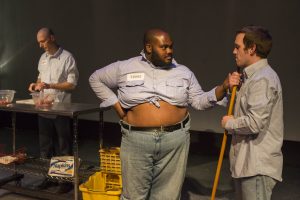 One of our activities was a Friday night School of Theater event nicknamed “Madness”. There were 12 playwriting students and we would take turns producing “Madness”. Madness took place every Friday night at 11 PM. Each playwright would write a brief scene based on a prompt given by one of the playwrights–the producer of the week. I had recently learned that the OU School of Theater had a large collection of puppets. I asked if we could use the collection for Madness.I produced an evening of 12 short scenes with puppets….Puppet Madness. All the playwrights could get a puppet from the collection (or not, it was up to them). The evening was a big success. When I asked where the puppets had come from, I was told that the woman who donated them had formerly run a puppet theater in a prison in Northern Ohio; Pat Olsen was her name. (I would eventually meet her.) The prisoners (eight in total) would write, produce and perform a new puppet play once a month. This entertainment was for the children who would come to visit their daddies at the North Central Correctional Institute. There were 4,000 men in the facility and lots of children to visit.

I was fascinated by the idea of a puppet theater in a prison and so Puppet Man was born. Or at least, conceived.

I did a lot of research. My second-year play (Bitten by a Boomslang) was partially set in Sierra Leone, Africa, a foreign country which I had to research thoroughly. I did not realize until I started writing Puppet Man that I was writing a play set in a location which was essentially a different kind of foreign country. I had never been in prison, nor even visited anyone in prison. I literally knew no one who had ever been in prison. I was starting from scratch, so I did exhaustive research on prisons and prison life. Every fact in the play is based on truth. There is a story about someone who is trying to smuggle in a ham radio. That idea came from a real story. The idea of smuggling juice out of the prison kitchen to make “jail-yard hooch” is true. And of course, all the information about the puppet theater are based on fact as well.

I also had to learn a lot about puppets. I had access to the puppets from the original collection. Hand puppets, muppet-style puppets, or as they are sometimes called “mouth puppets”. There is all kinds of puppet lore and one of the professors at OU specialized in Asian shadow puppets. I took a seminar from him and learned a lot about puppetry (Dr. Bill Condee). Puppets are essentially inanimate objects that come to life. I saw this as being a metaphor for my hero, who is, in the world of my play, an inanimate object who comes to life.

I started out using Plato’s allegory of the cave which was fun, but it didn’t really work for my play. I moved to Little Red Riding Hood. I wanted to use a fairy tale to frame the story, since the prisoners used fairly tales in their puppet plays for the kids. There are very few fairy tales which feature a male hero, and the ones that did (Jack and the Beanstalk, for instance) didn’t really tell a story that lent itself to the themes I was interested in. Little Red Riding Hood tells the story of a little girl who “dies” and then comes back to life; it had the “resurrection” theme I wanted. But Little Red Riding Hood is very passive in the traditional story, so I had to find a way to tell the story to make her more active.

I went to the National Puppetry Conference at the Eugene O’Neill Theatre Center in Waterford, Connecticut. I was challenged to 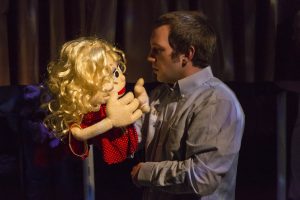 make my own puppet and I put a scene in my play where the hero (Pretty Boy) makes a puppet. I used much of the puppet-making technology I learned at O’Neill. I workshopped the play there and added a lot more puppetry of different kinds, such as found object puppetry. I met a man from Indianapolis (where I was about to move) who was very interested in my play. Patrick Weigand was instrumental in bringing this play to life, helping me find puppeteers, organizing readings, reading parts himself until we found a home for the world premier at Theater on the Square. Without Patrick, there would be no Puppet Man.

Pretty Boy, the protagonist of Puppet Man, is a man without hope. He is in prison and will be for 28 years. He is 22.The things a normal 22 year old looks forward to, getting married, having children, building a career, going to see the Mets play on a Friday night; these are things he will probably never be able to do. He is struggling with how he will cope with this very unpleasant reality. His intention is to do drugs and numb out, so that he doesn’t have to face the facts. But his involvement with the puppet theater brings out a side of him that he has never known. He exercises his creativity. He makes a puppet. And she begins to develop a mind of her own. She points him in a new direction. She comes to life….and so does he.

So for everyone who feels they are a little stuck, in a rut, or trapped…..Puppet Man is for you. Make one right choice, just one, and a whole lot of other things may begin to happen you never could have known about. And you may find yourself with options you never knew existed.